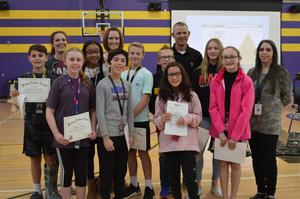 Students have many opportunities to shine on their campuses from sports fields and courts to theaters, band halls and classrooms. For a dozen sixth graders at Pieper Ranch Middle School, a writing assignment landed them "Young Author Award" honors and more.

A sixth grade student from Pieper Ranch Middle School recently became a published author when her 500-word essay titled “Bill Pickett, the Bulldogger” was included in the February issue of Wild West Magazine, part of HistoryNet.com.

Mayumi Torres, 11, received a certificate, letter and plaque as well as the honor of being published. Torres along with her fellow Pre-AP English language arts classmates entered the writing contest as an assignment. The managing editor, David Lauterborn, of Wild West accepted the top 12 essays, and he and his staff chose the winning entry from those 12.

The students were presented with the following question by Lauterborn, “On the wide-open Western frontier from 1865 to 1890, people and animals often depended on one another. How can we, as journalists, honor such relationships in story? We would like for you to find a unique instance of people-animal interaction in the West and write a 500-word story about it.”

The district’s ELA curriculum coordinator and a team of judges narrowed down the essays to the final 12 which were submitted to the magazine.